Trump – What to expect 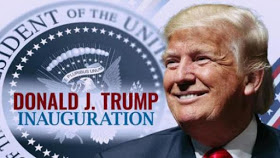 As Donald Trump is being inaugurated on this day, 20 January 2017, I look at what can be expected.

This information is derived from both his Excursion Chart and Numerology Chart.

I published a (short) look at his numerology a few weeks ago, which you can find here.

Trump is, in short, in a period of new beginnings and change. Individuality, ambition, initiative, new directions, and adding new ideas and ways of going about business will be the order of the day.

He has entered an entirely new phase of his life (since June 2014). He will bring in fresh ideas. It is a time of radical change, and he is ready for it. He will advance the new, and shift many things – like ideas and systems – away from the old way of doing and thinking, which have reached their “sell-by” date.

He will begin to shift ineffective systems that no longer serve the best interests of the growing awareness of the masses, as the global community becomes more and more aware of buying into a system of slavery, influenced by a select group of individuals. Freedom is our sovereign right.

Trump’s leadership qualities will become very apparent (and yes, I am sure he has some skills he will learn along the way). However, I see him taking on his responsibilities and facing his challenges and difficulties head on.

Donald trump is standing in his truth. He is taking a stand against systems that few would have the courage to dare confront, proverbially rushing in where angels fear to tread. He is inspired to make changes. He is probably the only person who possesses the power to do this at this point in time, to be honest.

The entire world (and galaxy) is in a period of new beginnings, and as always, these new beginnings will be marked by false starts and blind alleys. Trump will be doing the same – setting foot into uncharted territory. His willpower will be tested to the limit.

I do not envy his position, but do envy his “chutzpah”!

His biggest challenge will be to put humanity ahead of his personal desires.

This presidency may take a toll on his family and marriage. He needs a good marriage, though, for emotional support when he is out of the public eye. However, he may find it difficult to express himself emotionally in his relationships with his family and close friends at this time, and may experience emotional confusion or disappointment as presidency exerts its toll.

Donald will have to watch his health.

Apart from being a little vulnerable emotionally, he has a clear understanding of what he wants to achieve. He is quite used to attaining success when pitted against the odds. His mind is very active, and his thoughts unconventional. (Yay!)

He will come face to face with many unexpected situations. At times he may feel out of control. He must not be tempted to take unnecessary risks.

This is a time for personal spiritual growth more than financial growth in his life.

Another “energy” playing out in his life at the moment (that of his birth year 1946), really challenges his hypersensitivity in a big way, and you will see this when he becomes reactive. Especially when he feels “attacked” or “threatened”. However, positively managed, he should be considerate, diplomatic, and a good team worker. I think this will take a while, though, as he prefers to get the job done himself, and likes to make his own decisions.

My gut feeling from the start with Donald Trump has been that what you see is not who he is. he is far more intelligent and deep-thinking than the role he played to win the votes. Whether he knows it or not, he is representative of the awareness that people are waking up to, and the universal theme that has been ongoing for a while in the spiritual realms, of “all that is hidden must see the light”.

He is his own person. He cannot be bought, and he is going to be ruffling many feathers. For this bravery of taking on the old status quo and dismantling controlling systems and exposing the truth, he certainly earns my respect.

And now, only time will tell what the outcome of this will be.

Give the man a chance.