KARMA – the Word Means WHAT? 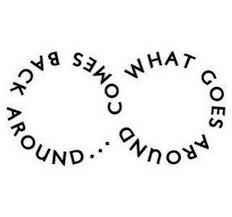 I have just written my blog called “Return to Sender” on the June 2018 energies numerologically, and am being very strongly prompted to do an analysis of the word “karma” to accompany it, in the way I do it and using my own logic. *SIGH* Lol! It’s not like I have nothing else to do.

Remember: My viewpoints in this blog, so you do not have to agree with anything or everything.

Okay. Here goes… Oh, and if all of this intrigues you, consider studying with me, either privately or via Metavarsity in Cape Town.

Firstly, karma has 5 letters. Oh wow! Excitement inside me! Of course! That makes perfect sense! 5 is the number of balance. Five is an extremist number, and can swing like a pendulum wildly from one extreme to the next, which is what karma is – a balance sheet. 5 is also a number that deals with temptations – earthly temptations of the flesh. In Christianity they refer to these temptations as “the Devil” and I think it is just an avoidance of taking ownership for your own stuff and passing the buck.

Secondly, the word starts with a K and ends on an A. This is relevant to how the process starts and ends, so let’s take a look at that.

Lol! Oh, dear – and there is the first clue… The letter K is interchangeable with the letter 11, of which the root number is 2. So let’s unpack that first. 2 is the number of duality. Of choices. We all understand choices, and know with any situation that arises we have choices, whether we choose to believe that or not. The letter K shows it is ME, seen by the straight up-and-down line looking like a 1 as you start writing the letter.

Then from the middle of the 1 (or the self) let’s call it at the heart and soul, there are 2 choices, the duality of the number 2. Both of these lines that complete the letter K are pointing forwards, to the future. The back, or past, is closed. Your choice is what to do going forward. One line goes up, and one goes down, each ending up in very different places should you continue with them. Or you could say that one choice will take you higher, or towards the light, and one will take you down.

Not only is K interchangeable with number 2, but K is the 11th letter of the alphabet. The word “light” is a word that adds up to 11. 11 is the portal to higher learning and evolvement… if you take the choice of going upwards. Should you take the other path, it is also a portal to a very dark place. Looking further at the number 11, you will see it is made up of two number 1’s, which suggests two people, equally yoked. So nobody can take the high road or claim “entitlement” with karma. We are all “one”, regardless of status or anything else. You harm someone else, it comes back and harms you. It is the law. A universal law.

The word KARMA ends on an A. A is number one in the alphabet, and is interchangeable with the number 1. Me, myself and I, ego… So, the word “karma” starts with me and my choices, and ends with me… but this time I am standing alone. I alone am responsible for my choices. The law of the circle. What I send out comes right back to me.

I am keeping this short, guys, so not getting in deeper than that into these two letters. There is so much more I would like to say, though… but please keep reading.

So what does the pivotal letter, or point of balance mean? I simply means that for the scales to balance depends on having the centre point to hold up the balance scales. More simply put, it means the success or failure of this “word/karma” DEPENDS ON the attributes of the letter R, or the number 18 (it is the 18th letter in the alphabet) and the number 9, as 1+8=9. So the letter R is an 18/9 letter.

If you think the position of a letter in the alphabet or a word is not important, consider what it means to come first or last. Lol!

Where to start with this letter… Okay, firstly, the letter R is again, like the letter K, characterised by beginning with a straight line or number 1, the self, and the top of the R looks like the letter P, which is deep spiritual thinking, but not disconnecting from the heart, as it is the number 16 which is karmic itself, putting selfish desires and intellect above intimacy and love. So adding the little down stripe differentiates the R from the P, and shows a moving forward, not a deep thought process and analysis like the letter P. The R with the closed circle at the top, or head, of the letter, shows learning and retention of memory and information. Could one say KARMA depends on learning from mistakes?

The number 9 is characterised by peace or war – the one or the other. But mostly, the 9 is the ending of a cycle, wanting to move on to the next cycle, and stands for understanding, unconditional love and non-judgement of others. Is this not why we want to overcome karma and balance the scales?

The 9 says you either get bitter, or you get better. Furthermore, the 9 is made up of a 1+8. The one says me, I am responsible, and the 8 says universal laws, as above so below, complete balance of yin and yang, and good judgement. Shew! So, karma (overcoming it) depends on the judgement of the self learning from mistakes, moving forward applying all the universal laws, without wanting revenge (this word starts with an R!). It says I use good judgement and with unconditional love and understanding I can let it go…

The 18 also says I use what I have, time, energy or finances, to help others, leading to the 9 which is saving the world – a humanitarian number, highly idealistic, upholding the vision of heaven on earth.

Message to self: Stop now and move on!

Reply to self: Okay…

The first vowel in the word, the sacred, soul part of the word, is an A. All vowels are sacred, and the letter A is known as the breath of God and thus physical reproduction and creation. No wonder the Christian Bible uses the name Adam (beginning with an A and ending with an M, the only letter pronounced with a closed mouth as in a closed womb to birth creation). In the destructive form the A, or number 1, is extremely selfish, but in the positive it strives, leads and innovates. But that aside, a baby does not become “alive” until it takes its first breath of air.

A is self-control, ambition, has male/yang strength and needs goals. So it seems like we are “created” and incarnate with the goal of evolving by balancing the scales of justice, or karma, something we probably can’t do “on the other side”, wherever that may be.

To me it almost says, that coming to earth as a living, breathing human is ambitious (no sh#t Sherlock) and brave, and the goal is to experience temptation, make choices, take the higher road to the light and evolvement, gain understanding and unconditional love and evolve to a higher level of consciousness.

Shew! And by doing so to balance the scales of justice – and karma.

And now I feel spent and exhausted after that last, very long sentence, and will leave you to ponder this further…

NB: Please note this is not an academic, researched paper, but merely me pinning down my present thoughts in the space I am in.