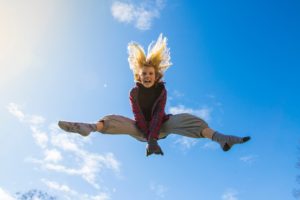 Time to LIVE a little. This month should have you in high spirits – high on LIFE! Yes, the word “LIFE” adds up to 23! December energy adds to 23! If you add 2+3=5, you can see why in numerology we write that as 23/5. By now you should be quite comfortable riding the highs and the lows of life and embracing both, knowing that there is nothing that can break your spirit. I know this because you are still here and alive. I feel excited just looking at the number 23!

December should bring a feeling of friendship, companionship and a sense of personal freedom. What a lovely energy for a December holiday season of festivities, family and friends. This should be a very different vibe to that of December 2017 last year, which was not a festive vibration at all.

This energy is creative, team-focused, friendly, diplomatic, yet exciting and a little quirky and spontaneous. I suspect many of you made new friends and found your soul families this year. These may be young friendships, although you may feel as if you have known them forever.

Number 23 is seen by many to have a mystical significance, so view December in a magical way and enjoy it.
This is the holiday season where you will likely come up with new ways of socialising, perhaps pooling resources and all contributing in some way to celebrate new friendships and new positive feelings around the festive season. You may find new and different activities to bond with and new ideas around sharing meals.

December will bring in a feeling of freedom; a feeling that anything is possible and achievable. It is a beautiful energy ahead of the energy that will prevail in 2019 – a creative, fun and playful vibe. Now just onwards and upwards! Wow for getting through these past few years!

A word of caution for December:

Number 23 is often described as the number of “incidents”. The 23 Enigma refers to the belief that many incidents, disasters and events are directly connected to the number 23. The link to disasters also corresponds with hexagram 23 of the “I Ching”, translated as “Splitting Apart.”

If I look at the numbers making up 23/5, the negative can be sensitive, reckless and unfocussed, and take unnecessary risks without looking at details, so always be aware of your surroundings.

Have fun but do not take uncalculated risks.

Some interesting facts I Googled on the number 23:

Photo by Mantas Hesthaven from Pexels