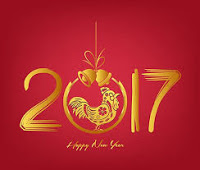 With the arrival of 2017, we step into unexplored territory. Nothing is the “same”. There is no going back. This is a time of new beginnings.

Set goals. Do not worry about how you are going to achieve them. Imagine the end results and put them on paper.  Let the universe know what they are. Make a “vision board”… Red cardboard, magazines, scissors, glue, koki pens or glitter pens and you’re good to go. Don’t overthink it. Page through the magazines, chat and drink coffee and just cut out any words or pictures that catch your eye and paste them. Goals and dreams will probably not come to fruition this year, but without identifying them, they cannot be put into motion.

In 2017, what used to work, may no longer yield the same results. Strive for independence, pull your weight, and do no leaning on others, but help and support those who need it. This year is about “doing”. Don’t say “Somebody ought to….”. That somebody is you. Just do it!

2017 starts with a 2, which says: Be supportive, help, bring peace and harmony to situations. Do what intuitively feels right, with integrity, even if nobody is watching. Be true to yourself.

The number 17 says you are unique and distinctive… Find your uniqueness and embrace it fully! Don’t let the opinion of others influence who you are.

2016 was emotionally draining and one of “letting go”, so there may be an empty space where ideas, beliefs, people or jobs used to be. Let go of what was and let the new come in.

Masculine energy will still dominate. The power struggles from last century will still rage strongly. Hopefully, the effect of brainwashing from power structures will start to burn out.

Strong men who lead by example and raise boys to be confident men are called for in many “fatherless” communities. A new kind of strong yet loving and guiding and supporting male energy is needed.

Many women will break free from old paradigms and redefine themselves. The new breed of female leadership has not emerged yet – hence the election of Donald Trump. There is a huge need for female role models who are not following the male model of leadership.

My feeling for 2017, is that people are going to be quite competitive about finding environmentally friendly alternative scientific solutions for problems on earth: Electricity, water, education, health, food production. People will be forging ahead next year with these ideas and inventions, but many will be impractical. The focus will be on affordability, simplicity and ease of implementation for the average household. Let the competition begin! However, I think real solutions will only start surfacing in 2019, and be implemented on a large scale in 2020. People will begin to live more simply and closer to Mother Earth, using technology in a practical way where necessary. Solutions to housing problems will take priority and there will be a shift in building materials utilized and methods of service provision. Many people will still hang on to living in isolated units for a while, but will be thinking deeply about this, and ponder the benefits of communal living, or shared accommodation. This new communal living will flow from the loneliness and sense of isolation many are feeling at this point in time, as well as the economy, as many struggle to maintain financial independence. Many are tired of struggling on their own. People are tired in general after the energies of the karmic 9-year last year in 2016, which seemed to overshadow everybody’s personal year energy to a large extent. This could be a year of inner loneliness as people strive for individual expression within their own truth. However, this is a year that will set the tone for many years to come.

Natural “medicines” are going to start coming into their own. In 2016 exposing fraud and corruption was on the cards – the “clearing out” of systems for personal gain to the detriment of humanity and “one-ness”. Corruption in the medical field in the interest of exploiting people is going to come under the spotlight more and more.

Humanity will be looking for alternatives to belief systems they have long held that are no longer serving them or holding true. Be on the lookout for some of the conspiracy theories to be proven correct against all odds and despite general disbelief and then anger about the lies we have been fed.